A passion for film and an eye for detail led to Barton Peveril students Josh White and Lucy Watkins winning the Best Cinematography award at the Wessex Colleges Filmmaking Challenge. 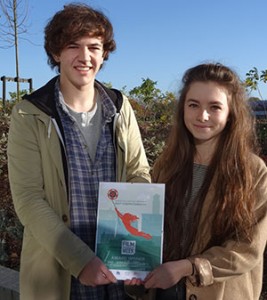 The duo’s two minute comedy, The Dead Bird, was one of three Barton Peveril entries in this year’s event.  Each team was given a mandatory title and genre for its film, together with a line of dialogue to be spoken by one of the characters.

Josh and Lucy had less than two weeks to come up with a workable concept for their entry, which they filmed and edited in two days.  Both attended Wyvern College before enrolling on Film Studies and other A Level courses at Barton Peveril.

Commenting on the value of the award, Lucy said: “It shows that you’re serious about what you want to do and makes you stand out from the crowd.”

Josh added: “It’s really useful to show that you are passionate about something. Comedy is one of the hardest genres to do so that makes it even more worthwhile.”

Barton Peveril encourages students to enter film competitions in order to showcase their work, add value to university applications and get their names known in the industry.  The winning Wessex Challenge films were screened at The Harbour Lights as part of Southampton Film Week.