Stacks of present-filled shoeboxes filled destined for underprivileged children across the world are a familiar sight in the run-up to Christmas, but it’s a rare family that donates more than 550 boxes in a single year! 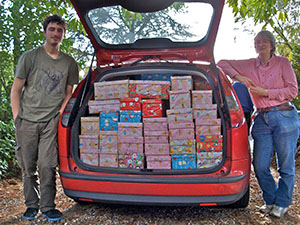 Alex Reeve and his mum, Sandra, did just that after setting out to beat their 2012 total and fill 365 boxes for Chandler’s Ford and Itchen Valley Rotary Club.   Somehow the project gained unprecedented momentum and for much of the year they found themselves living in a sea of boxes stacked floor to ceiling – and not just in the spare room.

Tracking down sale bargains is a major part of the exercise which also relies on shoe shops saving boxes and friends hunting for discounted stock online. Shoebox collection begins in March, wrapping in May and July sees the start of the production line that this year filled the colourful boxes with everything from woolly hats and teddies to books, Lego and skipping ropes.   It takes about six hours to fill 50 boxes – then Alex gets plenty of exercise running up and down stairs to store the completed gifts.

“I think that sending shoeboxes of useful and fun things to children who have almost nothing is a really worthy cause,” he says.

“It is quite hard work but really good fun.”

Members of Chandler’s Ford and Itchen Valley Rotary Club have dubbed Alex a ‘superhuman shoebox supporter’, and highlighted the Reeve family’s contribution as ‘a truly amazing example of generosity and commitment’.

Their efforts made up more than half of the Club’s 1050 box haul which is destined for children in Albania, Montenegro, Moldova and the Philippines.