Cheers from the Barton Peveril table raised the roof of Southampton’s Grand Harbour Hotel when the cast and production team of Cabaret scooped the Youth Ensemble Award at the Daily Echo Curtain Call Awards. 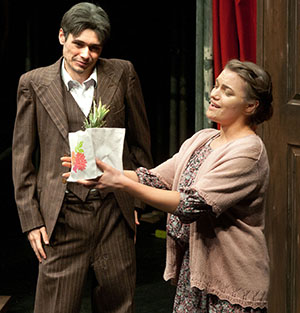 More than 300 shows, actors and directors were nominated for a host of awards recognising everything from acting skills and vocal prowess to costumes, lighting and overall direction. Cabaret was nominated in eight separate categories – a clear indication of the audience impact the production achieved.

On the night Jack Shaw-Downie and Felicia Gray won Best Supporting Actor and Actress in a Youth Production for their intensely moving, mature portrayals of Herr Schultz and Fräulein Schneider. And then the spotlight shone on the entire Cabaret team who were justly rewarded for their outstanding dedication and hard work by the Youth Ensemble Award for best youth production of 2014.

Meanwhile, many of the Cabaret cast will be appearing in the College’s 2015 production, once again directed by Gemma Whitcomb, Tory East and Bryan Postlethwaite.

Les Miserables (School Edition) is at the Theatre Royal, Winchester from 25-27 June.