News that the government is investing £50m in a new Holocaust memorial and education centre in central London has been welcomed by this year’s Lessons from Auschwitz ambassadors, Lauren Tew and Faye Momber. 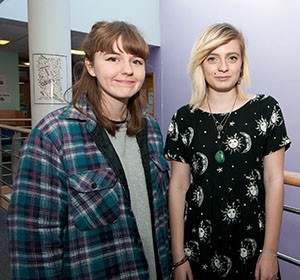 Each year Barton Peveril selects two Modern History students to take part in the project which offers 16-18 year-olds a profound insight into the realities of history.

During their AS studies, Lauren and Faye witnessed the personal testimony of Holocaust survivor Walter Kammerling during a moving visit to the Barton Peveril.  Then in November they saw Auschwitz-Birkenau for themselves, making this year’s 70th anniversary commemorations of the death camps’ liberation all the more poignant.

Reflecting on the visit and her attendance at Southampton’s Holocaust Memorial Day event, Lauren said: “One of most important things was the education we got from it. There are so many lessons to be learned.

“Auschwitz was so silent,” added Faye. “When you are there, you really understand and take it in.

“It’s really important to remember and respect the people who died, but if young people don’t have awareness it could all happen again.”

As part of their ambassador project, Lauren and Faye encouraged the college community to remember individuals, promote tolerance and challenge prejudice – pertinent messages for Holocaust Memorial Day and beyond.