Peter Marcus McDowell Impey’s volunteering commitments could lead you to believe that he’s cracked the secret to a 36 hour day. 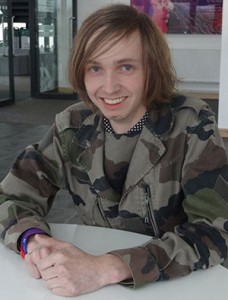 His involvement with three different theatre groups gets him in at the deep end with everything from building restoration to technical production and publicity.  He works on communications for the Wymering Manor Trust, runs two online journalism portals and is a Scouts’ Young Leader, working with the charity’s media team in his home city of Portsmouth.

Peter Marcus’s enjoyment of giving time for the benefit of others began  at primary school. A few months after starting college he was nominated for the Lions Young Ambassador of the 21st Century award by Cosham Lions Club: the fourth consecutive year that a Barton Peveril student has reached the regional finals of the competition.

“You just pick up things as you go,” says Peter Marcus. ” My advice on volunteering is to start small and give a couple of hours of your time each week.

“If it’s something you’re interested in it will build up over time. If not, you still have the opportunity to find something else.”

Juggling volunteering with AS Levels in English, Politics, Maths, Modern History and a Community Volunteering Award is certainly a challenge.  Peter Marcus’s involvement in a recent college charity event raised £128 for the Teenage Cancer Trust. He puts in up to five hours a week at his volunteering projects and spends a couple of hours working online each evening – all grist to the mill in terms of his CV, university and a career in journalism.