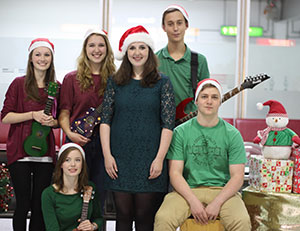 Abigail’s sister, Lydia, and fellow Barton Peveril students Ella Clark, Rowan Thorne, Ben Cartwright and James Warren formed a new band – Eugenie and the Lamps – to help Abigail record her song in a studio prior to filming at the airport.

Students from Solent Creatives produced the video – the third year they have been commissioned to provide a festive feel good factor.