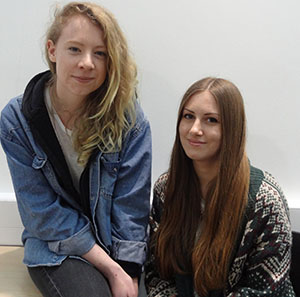 On Monday 27 January 2014, two Barton Peveril students will be among thousands of young people across the UK for whom the significance of Holocaust Memorial Day has taken on a deeply personal meaning thanks to the Holocaust Educational Trust’s Lessons from Auschwitz project.

Following their visit to the infamous death camps last autumn, Jess Asbury and Jade Bone became Next Step ambassadors for the Trust which offers 16-18 year-olds a profound insight into the realities of history.

The Lessons from Auschwitz course provided the Modern History students with an opportunity to hear the testimony of Auschwitz-Birkenau survivor Kitty Hart-Moxon at a preparatory seminar in London – a unique experience which made their personal journeys all the more powerful.

“The visit to Poland was completely different to how I thought it would be,” said Jade.

“When you hear a Holocaust survivor relating tales of how children were picked up and smacked against walls for picking flowers you realise that we will never be able to comprehend what Auschwitz was really like.”

Being present in a place where so many people are now absent had a profound effect on the students who were both struck by the uneasy juxtaposition of the camps and the modern-day town of Oświęcim (Auschwitz).

Jess commented: “It was a privilege to be selected for the trip and the reality of being there took a couple of days to sink in.

“At Birkenau we stood at the end of the train track and felt really alone.  Yet everyday life was going on just next door; it made the town a weird place to be.”

As ambassadors for the Holocaust Educational Trust, Jade and Jess are working on ways to share their understanding of the contemporary relevance of the Holocaust – and subsequent mass genocides in Cambodia, Rwanda, Bosnia and Darfur – with other students and the wider community.

“Discrimination is still used as a weapon and when terrible things are still happening in the world it’s clear that we have not learned from the past,” says Jess.

“Visiting Auschwitz has enabled us both to see relevant issues in a different light. It was an incredible experience.”

Eastleigh MP Mike Thornton and Barton Peveril History lecturer Nick West were among the teachers and community representatives who joined the Holocaust Educational Trust’s 2013 trip. To date, more than 21,000 students and teachers from across the UK have participated in the Lessons from Auschwitz programme.