Holocaust survivor Walter Kammerling called on teenagers to trust their judgement and not turn away from the reality of prejudice when he spoke to History students at Barton Peveril. 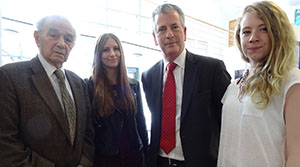 “Everyone has his or her prejudices.  The only difference is how we deal with them,” the 90 year-old told an audience of staff, students and guests including Eastleigh MP, Mike Thornton.

At the age of 15, Walter Kammerling witnessed the events of November 1938 when Jewish synagogues, shops, businesses and homes were attacked across Germany and Austria. Hundreds of Jewish men were arrested and incarcerated after what later became known as Kristallnacht – the night of broken glass.

“It wasn’t romantic. It was a very nasty pogrom,” he explained, emphasising his dislike of the ‘Kristallnacht’ label. “With a stroke the Jews in Vienna became outlaws in the truest sense of the word.” 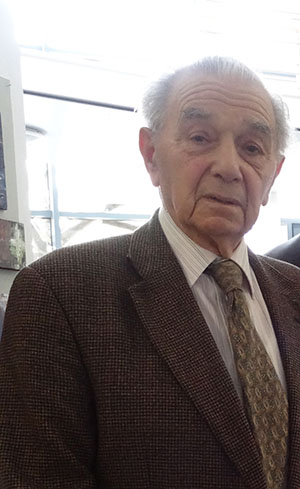 Walter came to Britain from Vienna on the Kinderstransport. He never saw his parents or his eldest sister again: they were murdered by the Nazis at Auschwitz a few months before the camp’s liberation in January 1945.

Commenting on the emotional impact of hearing Walter speak at first hand, Mike Thornton said he was ‘deeply touched’ by his testimony.

“Walter Kammerling’s story was incredibly powerful and served as a vital reminder of the horrific brutality of the Nazi regime,” he said.

“His personal account, his remaining pain at the loss of his whole family and his paramount desire to ensure that we all counter hatred was inspiring. I urge anyone who is given the opportunity to take the Holocaust Educational Trust trip to Auschwitz to do so.”

The Lessons from Auschwitz project offers 16-18 year-olds a profound insight into the realities of history and aims to honour the memory of those whose lives were lost, while taking forward lessons taught by those who survived the atrocities.