Barton Peveril musicians were on stage at Thornden Hall just before Easter. Their Spring Concert rounded off a busy term which featured a number of events for A Level Music and Music Technology students. 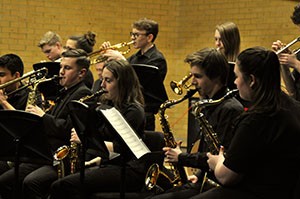 Quizzing musicians about life in an orchestra and hearing about the gruelling audition process and competitive nature of the industry was a highlight for AS and A2 musicians who visited The Anvil in Basingstoke.

After taking part in a study session based on their set works and meeting players from the Bournemouth Symphony Orchestra, students joined the audience to enjoy a  performance of Brahms’ Liebeslieder Walzer, Mozart’s Sinfonia Concertante and Beethoven’s Symphony No. 7.

Meanwhile, AS Music Technology students were treated to a guest lecture from Richard Williams, a veteran of EMI and other record companies who  worked with artists including The Stranglers, Style Council and Motorhead. 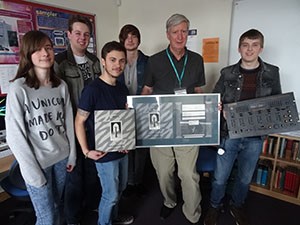 Richard brought in a 4-track recorder that would have cost the modern equivalent of £3000 to buy. He also showed students  original artwork from his LP ‘City Walls’, a record featuring bands from Southampton that was slammed by Melody Maker but championed by BBC DJ John Peel.

His visit brought the drama of Southampton’s 1980s music scene to life with anecdotes and examples, interesting production tips and creative ideas to inspire our young aspiring producers and performers.