Forget Rupert Bear and Dr Who; a Barton Peveril student has taken the scarf world by storm after sporting a binary knit at a recent Maths Inspiration event. 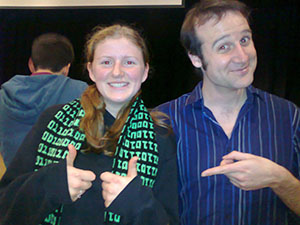 Maths and Further Maths enthusiast, Jo Baldwin, was one of 15 students attending the popular show which she first discovered as an AS student.

At last year’s event Jo was smitten by the binary quotation scarf worn by presenter, Matt Parker. Known as ‘the stand-up mathematician’, Matt mixes passions for mathematics and stand-up comedy in his shows, the wardrobe for which often includes a scarf knitted for him by his mum.

Jo explains: “Matt’s scarf said Maths is fvn, keep doing maths – a quote of his which his mum found on the internet.  The v in fvn was an accurate translation as a 1 had been written in place of an 0 by mistake.

“I saw Matt and his scarf again on his maths comedy tour and it was then that I realised I needed my own!  I asked for the pattern and for my 18th birthday my mum presented me with my own binary scarf.”

Jo wore her special knitted number on the Maths Department trip where it caught Matt’s eye, resulting in the nickname ‘scarf girl’ and a photo opportunity.