Congratulations to our chair of governors, Professor Roger Brown, who was awarded the Lord Dearing Lifetime Achievement Award at the recent Times Higher Education Awards. 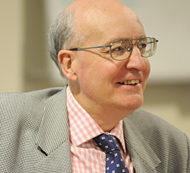 The honour recognises individuals whose contribution to the world of higher education goes above and beyond their own academic interests. Professor Brown has championed the cause of higher education throughout his career, from time at the Department of Trade and Industry during the Thatcher administration through to the pioneering work on standards which he led as chief executive of the Higher Education Quality Council.

Roger Brown became chair of Barton Peveril’s governing body – known as the Corporation –  after retiring from the position of Vice Chancellor at Southampton Solent University in 2003.

Commenting on Professor Brown’s award, Barton Peveril principal, Jonathan Prest, said: “Roger is an outstanding educationalist: his grasp of the issues of the day is immense and this is matched by a courage to challenge the status quo or the latest fashion and concentrate on what matters: the quality and value of the learning experience for young people.

“Barton Peveril staff, students and parents are very lucky to benefit from so much of his time.  I cannot imagine a more worthy beneficiary of the Lifetime Achievement Award.”