“Be prepared for lots of surprises, but keep focussed on what you want to achieve.” 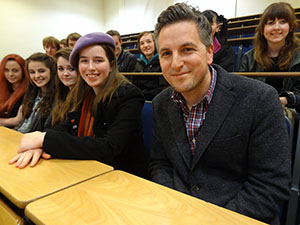 These were just some of the pearls of wisdom that Ben Willbond provided for students of Film, Media and Communications & Culture during a talk primarily aimed at young film makers, but also any student aspiring to a role within the film industry.

Willbond – writer, producer and star of Horrible Histories, Yonderland and The Thick of It – discussed new project ‘BILL’, a film about the life of Shakespeare. He also shared his experience of working in the film industry and the challenges that he has faced so far.

Students gained an insight into what makes a good director, acting for film and tips on script writing, as well as finding out a bit more about Willbond’s personal inspirations and getting good advice: “Absorb everything. Watch everything and anything. It will all inspire.”

Ben’s engaging talk ended with an open Q&A session with students who savoured the opportunity –and kept him talking for quite some time!

“It was so informative and inspiring to find out what experiences he felt revolutionised his career and to get his perspective of the industry. It was funny too!”