Barton Peveril linguists spent a day at Southampton University where they met undergraduates recently returned from a year abroad and tried out new languages including Mandarin and Portuguese. 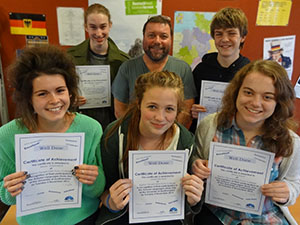 A series of workshops followed an introductory lecture on the importance of learning a foreign tongue.  During the popular Q&A sessions, students and staff were buoyed by the knowledge that unemployment among the university’s language graduates is extremely low (2.2%) – an indicator that, even in difficult economic times, studying a language is a good investment in the future!

Some of the students who attended the study day are pictured with their certificates of achievement and Barton Peveril languages lecturer, James Underwood.