It’s the sporting highlight of the college calendar and Barton Peveril will be represented in a record seven different sports at next month’s British Colleges Sport championships held at Bath University. 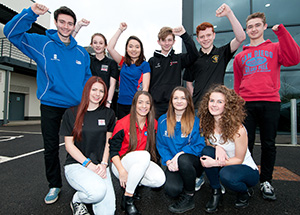 Trampolinist Catherine Tilling is hoping to repeat her gold medal performance for the South East team as one of five students selected for the second year running. She will be joined by cross country runner Calum Upton, golfer Alex Bampton, netball player Zoe Exall and hockey midfielder Luke Cornish who both played for their sports’ representative squads in 2013 and return to the competition in top form.

The college will be represented in the pool for the first time by James Millar who won the men’s 50m and 100m breaststroke regional competitions.  South East women’s singles badminton winner Ellie Deane will be giving her all on the badminton court while George Butler and Alana Spiers will join Calum Upton in the cross country competitions.

Commenting on the college’s success, Head of Sport and PE Luke Hampton said: “It’s a fantastic achievement to have these students competing at the highest level of college sport.

“Their prowess demonstrates the strength of the sports provision at Barton Peveril and I’m very proud of their efforts.”

Barton Peveril’s strong consistently strong presence at the championships caps a fantastic year for Team BP with both boys’ and girls’ basketball teams and boys’ 1st and 2nd football teams all reaching the Hampshire Cup finals.