Two thirds of the UK’s leading research universities were among 73 exhibitors at our Higher Education Fair. 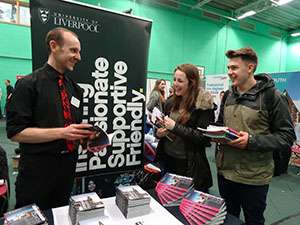 Sixteen of the 24 Russell Group universities – including Oxford and Cambridge – were represented at the event which has doubled in size since 2004 and now ranks among the largest of its kind in the country.

From Scotland to Sussex, Yorkshire to Wales, first year students had their knowledge of the British Isles put to the test as they discussed course and campus options with representatives of Scottish, Welsh and northern universities, as well as those closer to home.

Live entertainment from the London-based Institute of Contemporary Music Performance added to the buzzing atmosphere which was shared with Year 10 and 11 pupils from Hamble, Thornden, Brookfield, Wildern, Cantell, Quilley and Swanmore schools . Pupils were encouraged to think about subject choices and the GCSE results they will need for successful progression to sixth form college and university.

Feedback left on the scribble board at the Fair underlined its ongoing success.  ‘Incredibly useful, I have so much choice!’ wrote one student, while another commented: ‘A brilliant opportunity and one of the most informative things about HE ever’.