Finding yourself lost for words when introduced to royalty is one thing – but being unable to speak because you’re wearing a scientific mask is quite another! 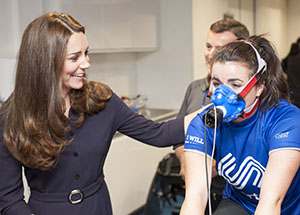 That was the situation rising golf star Emma Allen  found herself in when the Duchess of Cambridge toured an athlete workshop at the GSK Human Performance Lab in London in her role as patron of SportsAid.

The Duchess saw the funny side of her bid to make conversation and gave Emma an encouraging pat on the back – moments that were captured on camera and used extensively by the media.

“It’s wonderful to have someone like the Duchess as a figurehead, especially for girls in sport,” said Emma, who is a SportsAid recipient and was one of 30 potential Olympians selected for the elite training day.

“It was an amazing experience – the facilities were world class, like nothing I have ever seen before. 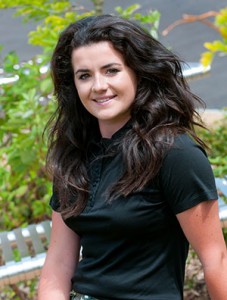 “It would have been lovely to have a conversation but we were there to show how the lab carries out research on elite athletes and I just happened to be doing a respiration assessment at the time!”

The Hampshire Girls Golf Champion, county and England team player has already achieved an English A Level and will take her final exams in History and Classical Civilisation at Barton Peveril next summer.

Meanwhile, Emma represented England at the Home Internationals in August and is set to take up a full golf scholarship at the University of Missouri next autumn – one of four scholarship offers she has received to study in America.