When Josh Reynolds’ tutor suggested he should start blogging as part of his Extended Project on football journalism, little did he think his opinions would attract more views than those of professionals like Michael Owen, Ray Parlour and John Aldridge. 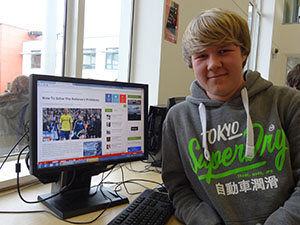 “I can’t believe it, things have taken off so fast,” says Josh, who describes himself as a person whose life revolves around following, playing and now writing about football.

“My Sportlobster blog got 1,500 views on its first day and within a week I had been approached by two other sites – caughtoffside.com and the4thofficial.com. I’ve even been offered payment by one site, which is brilliant!”

The second year former Wyvern student chose ‘The Makings of a Good Match Report’ as the title for his Extended Project, which he is completing alongside A Level courses in Media, Business and Sociology.

“I have had some great feedback from readers who like my posts because they run fluently and have all the relevant facts,” says Josh. “That’s a great accolade which I really appreciate.

“I don’t like to write about a game I haven’t watched but comment is irrelevant unless it’s immediate so the biggest challenge will be maintaining a healthy balance between blogging and studying!”