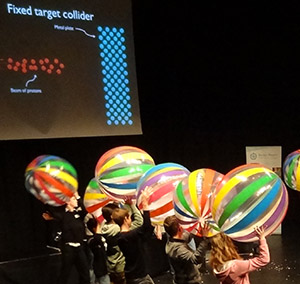 Designed to be fun but informative, students extended their current field of learning and explored topics including Newton’s laws of motion, how to identify colourless solutions and what it takes to support a chocolate egg on top of a tower built using just newspaper and sticky tape.

The girls heard eminent scientist Professor Sir David Payne talk about his work in photonics –  the science and application of light and electronics – and enjoyed a laser light show staged by the University of Southampton.

Summing up the days’ success, Barton Peveril Director of Science, Dr Nathan Cheung, said: “It was great to see so many engaged students getting stuck in with their workshops, helping each other out and asking intelligent questions.

“Days like this are really important because they awaken and nurture a love of STEM subjects at an early age.

“Barton Peveril’s new £5m Science Centre is due to open in October 2015 and we look forward to seeing many of the promising scientists who came along to these events studying A Levels with us in the future.”