Media Diploma student Haden Pone had his voluntary work with Unity 101 recognised by a formal award at the community radio station’s celebration evening. 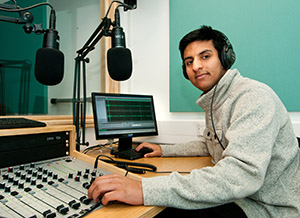 Haden came to Barton Peveril from Swanmore College and received the Unity 101 College Award for Exceptional Achievement based on his Extended Project in radio broadcasting.

Media students at Barton Peveril have established a strong partnership with Unity 101 which hosts regular broadcasts from the College’s own studio.

Praising the opportunities afforded by Barton Peveril’s links with the station, Haden said: “I’ve always taken an interest in radio but never had the chance to get fully into it.

“As soon as I heard about the Extended Project I picked it. Working with Unity 101 is brilliant – just seeing how much goes into making a programme is a good insight and it’s given me great vocational skills.”

Unity 101 Community Radio is an independent voluntary organisation which aims to promote and broadcast the music and culture of Asian and minority ethnic communities in Eastleigh and Southampton.