Every picture tells a story – and the opportunity to explore the meaning behind a painting by Victorian artist Edwin Long led to a national competition win for Barton Peveril student, Brigitte de Valk. 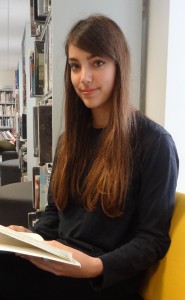 Brigitte (17) wrote a poem in response to the scene portrayed in The Babylonian Marriage Market, an extraordinary painting depicting an annual event in the ancient state of Babylonia when all girls of marriageable age were gathered together and offered for sale to the men of their village.

The painting is owned by Royal Holloway, University of London, which has a renowned art collection and ran its Year 12 comparative literature and culture art writing competition for the first time this autumn.

Brigitte’s original, creative approach impressed the judges who described her work as ‘a very touching and beautiful poem and an exceptional combination of sensibility, expression and contemporary relevance’.

“It’s a real confidence boost and has certainly fired my enthusiasm,” said Brigitte, who penned most of her poem while waiting for a train. “I didn’t follow any structure or form so my entry was quite abstract.  It was a nice surprise to win!” 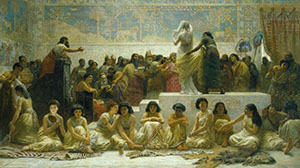 Reflecting on the themes in Long’s oil on canvas scene, she continued: “The Babylonian Marriage Market holds great significance for contemporary society sexism. Women are still being subjected to oppression and inequality.

“I think that’s the reason art exists – to mirror the darkest and most beautiful aspects of the world.”

As well as a £75 cash prize, Brigitte had the opportunity to see Long’s painting in person when she toured the Royal Holloway Art Collection as the guest of curator Dr Laura MacCulloch.

Royal Holloway is one of several London universities offering Brigitte a place to read English after she completes her A-levels in English Literature, English Language, Classical Civilisation plus the Extended Project at Barton Peveril next summer.